Can You Identify This Unusual Coin? 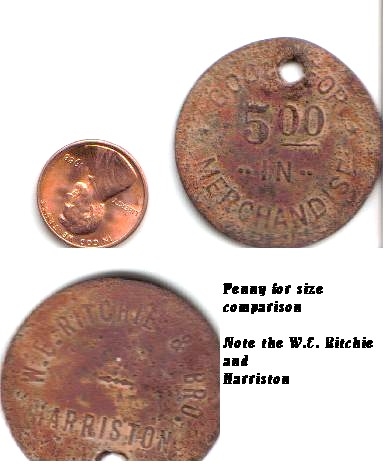 I received an unusual email from an antiques enthusiast in Virginia. While on a hunt hear Kelly's Ford, VA, Mr. Eckhardt and his wife found several Civil War era relics and this mysterious token, pictured above. His subsequent search led him to Macon County, IL and a man by the name of William Ritchie. Here is what Mr. Eckhardt wrote about his find in VA:


"We know the federal troops camped in the area near Kelley's Ford, VA, and a battle with over 11,000 troops took place near the area we found the token but still we can not find information verifying it is a civil war relic. Everything points to your township and the Ritchie family located there as the coins original origin. But, the amount of $5.00 back in civil war days would have been huge for a token. All the other tokens we have seen were from 1 cent to $1.00. We asked the local museum curator and he thought it could have been carried by a soldier but he too was suspicious of the high price on the token. He has heard of tokens up to $5.00 but to his knowledge nobody has ever been able to validate one as authentic civil war era."


Since I love a good mystery, I did a little digging and this is what I know so far about the Ritchie family. Samuel and Susan Ritchie apparently migrated to IL from PA sometime after the birth of their daughter Susan about 1852, when the family is listed in the 1860 Macon County census. Samuel was a well to do farmer, owning $9000 worth of real estate. Four Ritchie men are listed in the 1880 census for Illini Township (I didn't check alternate spellings). One was John (b. abt 1834), who erected the first house in the new village of Warrensburg; Samuel (b. abt 1841), who was a blacksmith and kept a general store called Ritchie and Bro.; Joseph (b. abt 1847), who was listed as a farmer. The fourth Ritchie was William (b. abt 1840), who was listed in the 1880 census as a grain dealer and had an elevator with a capacity of 12,000 bushels. William Ritchie married Mora D. Funk on 14 October 1872 Macon County, IL. Their marriage license lists her name as Nora, but the censuses list her as Mora. Easy to make a mistake, one way or the other.

In 1880 the William Ritchie family was living in Illini Township, and his occupation was listed as Grain Dealer. He was a successful business man and a well respected leader in both the city of Decatur and the village of Warrensburg. He built a splendid home on his farm outside Warrensburg and called it "Walnut Lawn." After his death in 1919, William Ritchie was listed as one of the farmers in the county worth more than $50,000, a considerable sum in those days. The present day Highway 127 passes through some of the land that once belonged to William Ritchie.