Including excerpts from, "History of Macon County, Illinois", 1880

Prior to 1829 the territory included within the present boundaries of Macon county formed a part of the county of Shelby. Before the assembling of the Legislature in 1829 a committee of three, consisting of Benjamin R. Austin, Andrew Smith and John Ward, had been appointed to go to Vandalia, then the capital of the State, and secure the passage of an act dividing Shelby county and creating a new county out of the territory thus divided.

The committee succeeded; and during the session the following Act establishing the county of Macon* was approved.

"AN ACT TO ESTABLISH A NEW COUNTY TO BE CALLED THE COUNTY OF MACON. 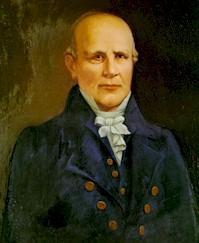 
"Macon county derived its name from Hon. Nathaniel Macon, of North Carolina, whose fame, at the time of the formation of the county, extended throughout the nation. He was born in Warren county, N.C., in 1757, and died in the same county, Jun 29th, 1837. He was educated at Princeton, N.J., and was there at the opening of the war of the Revolution. In 1777 he left college, and served for a short time as private in a company of volunteers. At the expiration of his term of service, he commenced the study of law, but soon re-enlisted in the army under his brother John. He continued in the service until peace was declared. He was present at the fall of Charleston. For all his arduous services in the war, he steadily refused compensation, nor would he accept a pension after the government had provided one. Before he left the army he had been elected to the State Senate, in which he served until 1785. When the Constitution of the United States was proposed, he, like Patrick Henry, thought "it squinted too much in the direction of monarchy," and therefore opposed its adoption. He thought the general government proposed was too independent of the States. Mr. Macon was elected to the lower house of Congress in 1791, where he continued to serve until 1815, serving as speaker from 1801-1806. From the lower house he was transferred to the U.S. Senate, in 1816, where he remained until 1828, and was President pro tem. of that body in 1825-27. He was thirty-seven years in Congress uninterruptedly--the longest continuous service of any one man. Twice during Jefferson's administration he declined the office of Postmaster General. He was a Democrat in politics, and had an earnest conviction in the ability of the people for self-government. Jefferson said he was "the last of the old Romans," and Randolph called him "the wisest man he ever knew." In his temperament he was a stoic, disregarding style and conventionalities, and in all thing practiced the strictest economy."

In 1829, when Nathaniel Macon retired from public life, he was one of the most powerful and influential men in the United States. He was honored by his peers by the creation of "Macon" Counties in Illinois, Georgia, North Carolina and Alabama. Both Georgia and Mississippi have cities named for him. Randolph-Macon College in Ashland, VA and Fort Macon in NC bear his name. And the general population he had tried so diligently to serve also honored him by bestowing his name on their newborn sons. Even though he was called back to brief duty in 1835 and 1836, he seldom strayed far from Buck Spring. He died in 1837 and was quietly buried beside his wife on the homeplace he loved in Warren Co., NC.

The National Plaque at his grave site reads as follows:
Nathaniel Macon
1758-1837
Nathaniel Macon, a national prominent senator and congressman from North Carolina, was born December 17, 1758. He served in the United States congress continuously for thirty-seven years. As representative: 1791 until 1815, and senator from 1815 until he resigned in 1828. As speaker of the house of representatives, 1801-1807, Macon was one of the most powerful men in the nation and exercised great influence until his death June 29, 1837.

His wish was that no grief be expressed at his funeral. He requested that dinner and grog be served and that each friend cast a stone on his grave. He is buried at his homeplace beside his wife and son. The fourth grave is believed to be Macon's grandson. Large mounds of stones cover all of the graves. Thomas Jefferson referred to Macon as "THE LAST OF THE ROMANS."

*Painting by Robert D. Gauley, 1911, from the Collection of U.S. House of Representatives. This painting is in the public domain.

Learn more about Nathaniel Macon by visiting these sites: