All photos on this page kindly submitted by Sally Hursh, from the collection of Joseph Elmo Hursh. 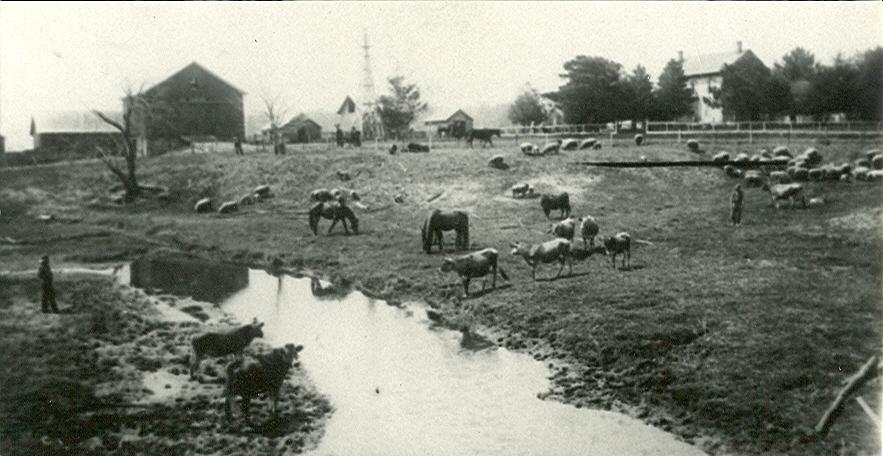 THE JOHN CLARK BATCHELDER FARM IN ILLINI TWP. - Circa 1895

Samuel Elisha Batchelder built the little part of the house (little part covered with trees in this photo) when they arrived from New Hampshire. The large part was built later perhaps by John Clark, his son and my great-grandfather. 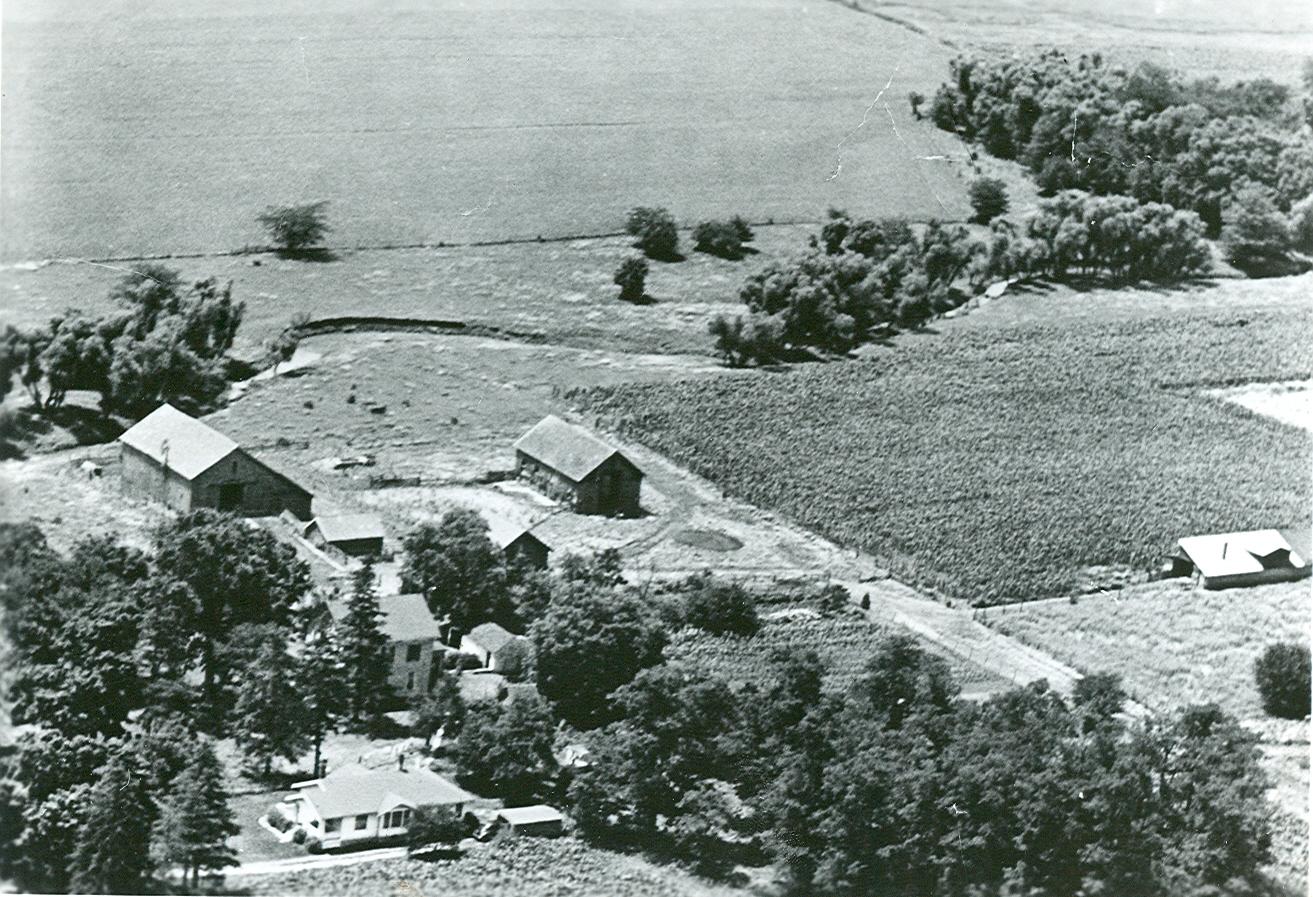 After John Clark Batchelder's death, my grandfather, Joseph Elmo Hursh bought the farm because his wife, Ina Batchelder, John Clark's daughter, wanted it. Five to six generations lived there until it was razed when my grandfather died in 1974. It had an attic across the whole top of the large house. And the smaller part built first by Samuel had two bedrooms upstairs. They with four children lived in smaller part at first. There were about 14 rooms in the large house. I lived my first 10 years in the white bungalow then we moved into the big house and Granddad traded us homes. Childhood memories are of playing in the barn, and all the buildings, the groves and of going fishing back in the creek. You can even see the corn cob pile (center of picture) by old corn crib. The old crib wasn't built with nails as I remember and sat upon several very large boulders. I'd hide under there when the cows came down the path in from the pasture. The creek is a branch of Willow Creek. You can note it on the 1874 atlas plats. 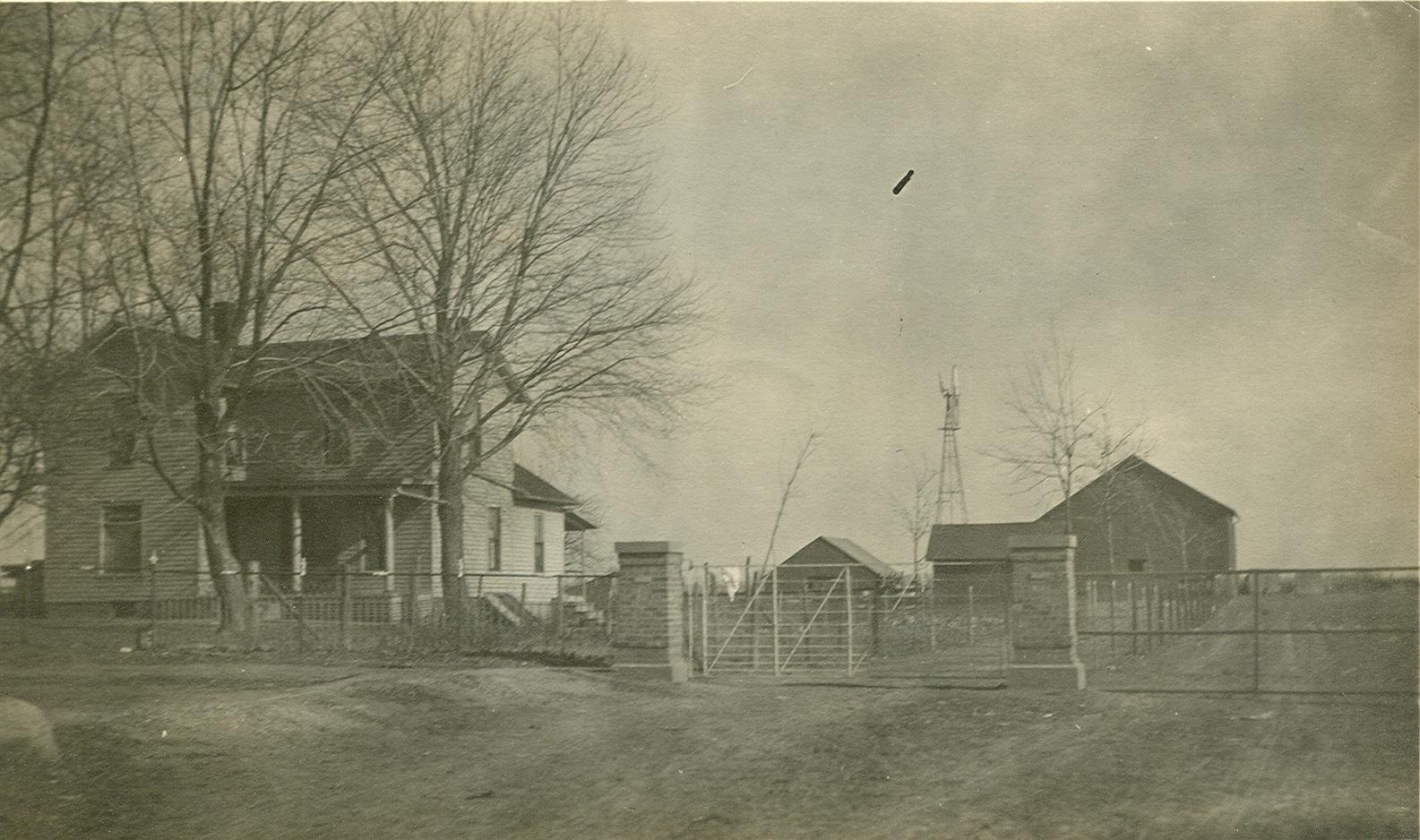 THE DANIEL AND LOVINA HURSH FARM

Years later the Bournes lived at this farm, and today it looks basically the same - the brick pillars are still there. 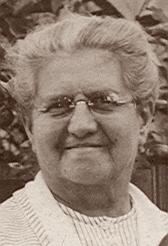 This is a closeup of Lovina Getter Hursh, wife of Daniel Hursh. This photo was taken in Warrensburg. On the back is written "Mrs. Shinnaman and Lovina Hursh - Warrensburg". 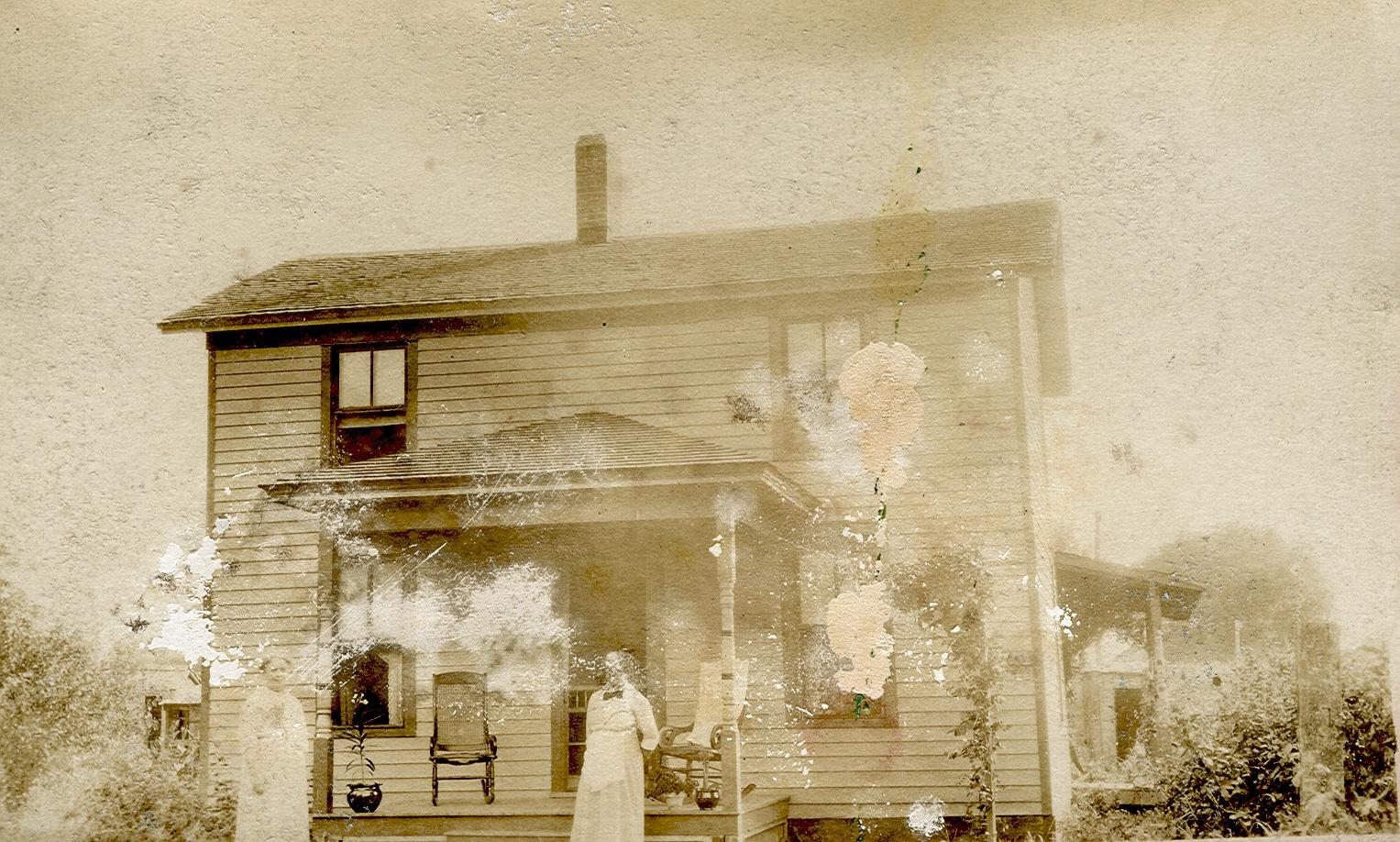 This photo was taken in Warrensburg, probably at the home of Mrs. Shinnaman. I wish the photo hadn't been damaged. Anyone recognize this house?

This early drawing of the John J. Batchelder farm appeared in the 1874 Macon County Atlas. Note the Illini church in the right background.

Barn-Raising at Illini - On Thursday last many of the people of Illini gathered, by invitation, at Mr. John J. Batchelder's, near the Congregational church, at the centre of Illini township, in accordance with an old custom in New England, to a "barn-raising." The frame was chiefly of oak, with some black walnut, 40 feet wide, 84 feet long and 21 feet high, from sills to eaves, ect.; very heavy. But excellent success crowned the labor, and the noble building is an object of admiration - probably the nicest farm in the county. A high brick basement is under the whole. An excellent dinner, provided by Mrs. B., refreshed the laborers and visitors. - In sight near are three houses being built and many more being enlarged, besides corn sheds and churches. Thus this prairie is adorned with houses and improvements. 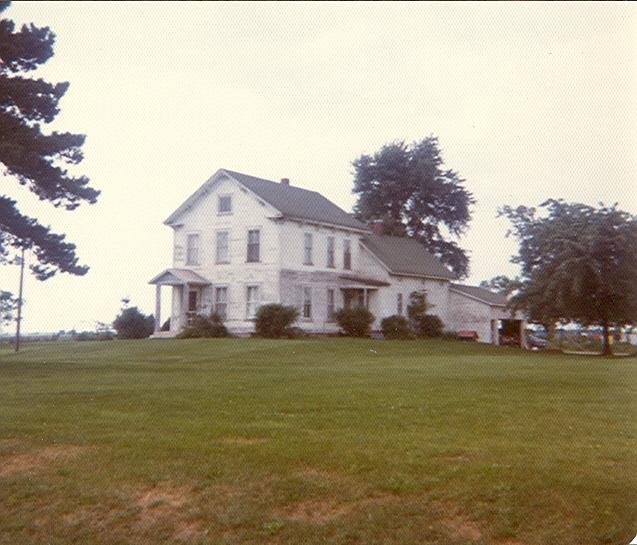 This photo was taken in August 1975. The home is located south of the Illini church near Warrensburg.

ANOTHER VIEW OF THE JOHN JENNESS BATCHELDER HOME

This photo was taken in April 2005. In the distance, through the trees, is the back of the John J. Batchelder house as seen from the SW corner of the cemetery at the Illini church. The next photo depicts a picnic that occurred on the Batchelder property many years earlier. 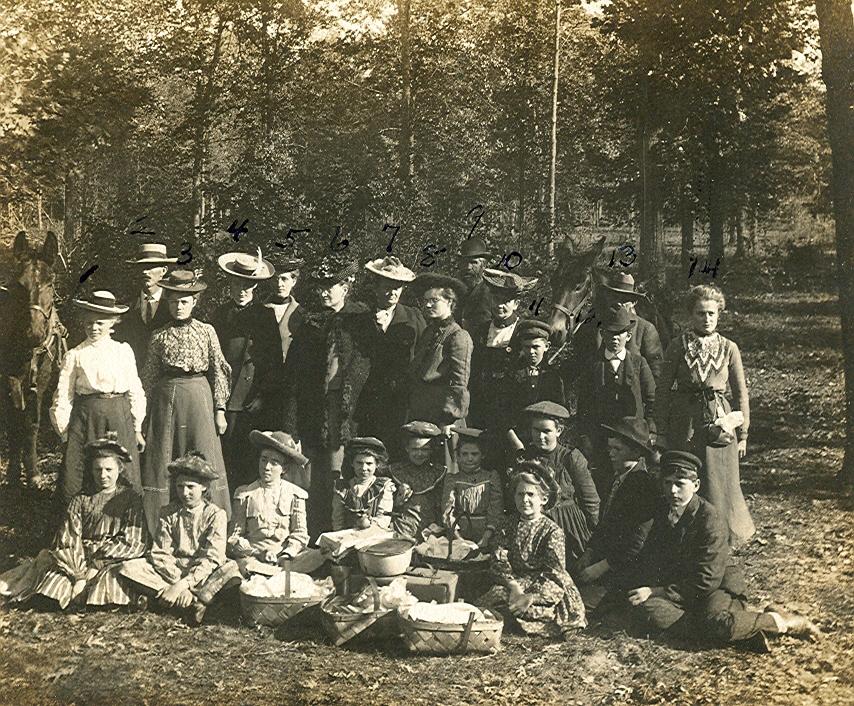 A PICNIC AT THE MAPLE GROVE OF JOHN J. BATCHELDER 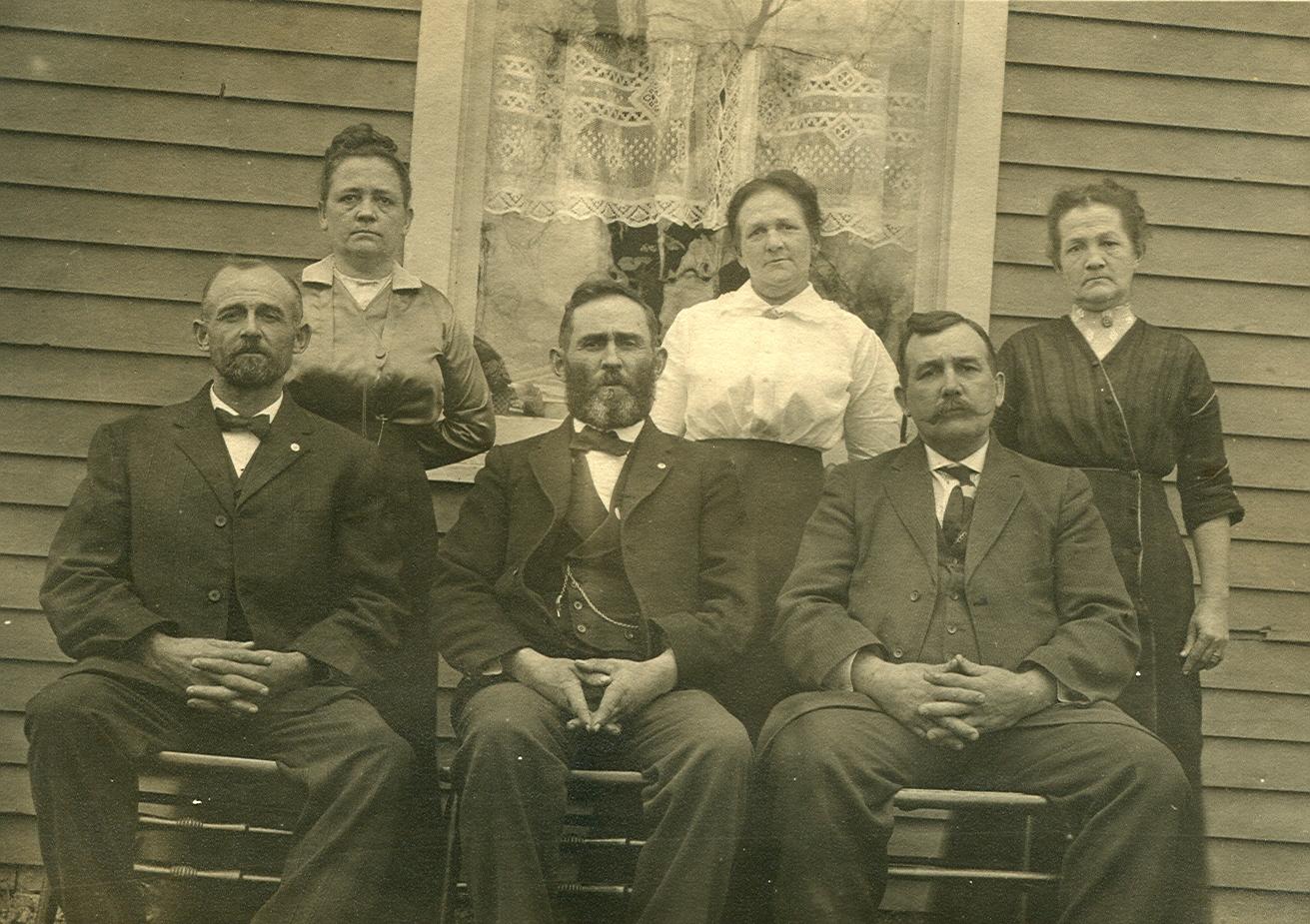 THE PIPER FAMILY OF WARRENSBURG

There were three of this same photo in my grandfather's collection. On one was written "Piper family of Warrensburg". I don't remember the name Piper when I lived at Warrensburg. Checked the 1880 Census - no Pipers at Warrensburg then. The name appeared in Decatur, Niantic and Blue Mound. Not many, though. Who knows anything about the Piper family and who are pictured here?

NOTE from CC: In the 1900 Macon County Census, Daniel Piper is boarding with the Ezra Baker family, and is listed as single and a "brother-in-law". That would make him the brother of Florence V., Ezra's wife. Daniel married Mrs. Edith M. Mixell on 10 Apr 1907 at the court house by Judge O.W. Smith. In 1910 Daniel Piper, age 42, is listed in Illini Twp., married to Mabel, age 32, with step-daughters Jennie and Ruth Mixell. It was the second marriage for Mabel Barber, widow of William Mixell, who died in 1905. Edith Mabel Barber Piper died in Warrensburg, Illini Twp., on 13 Nov 1914 at the age of 39. 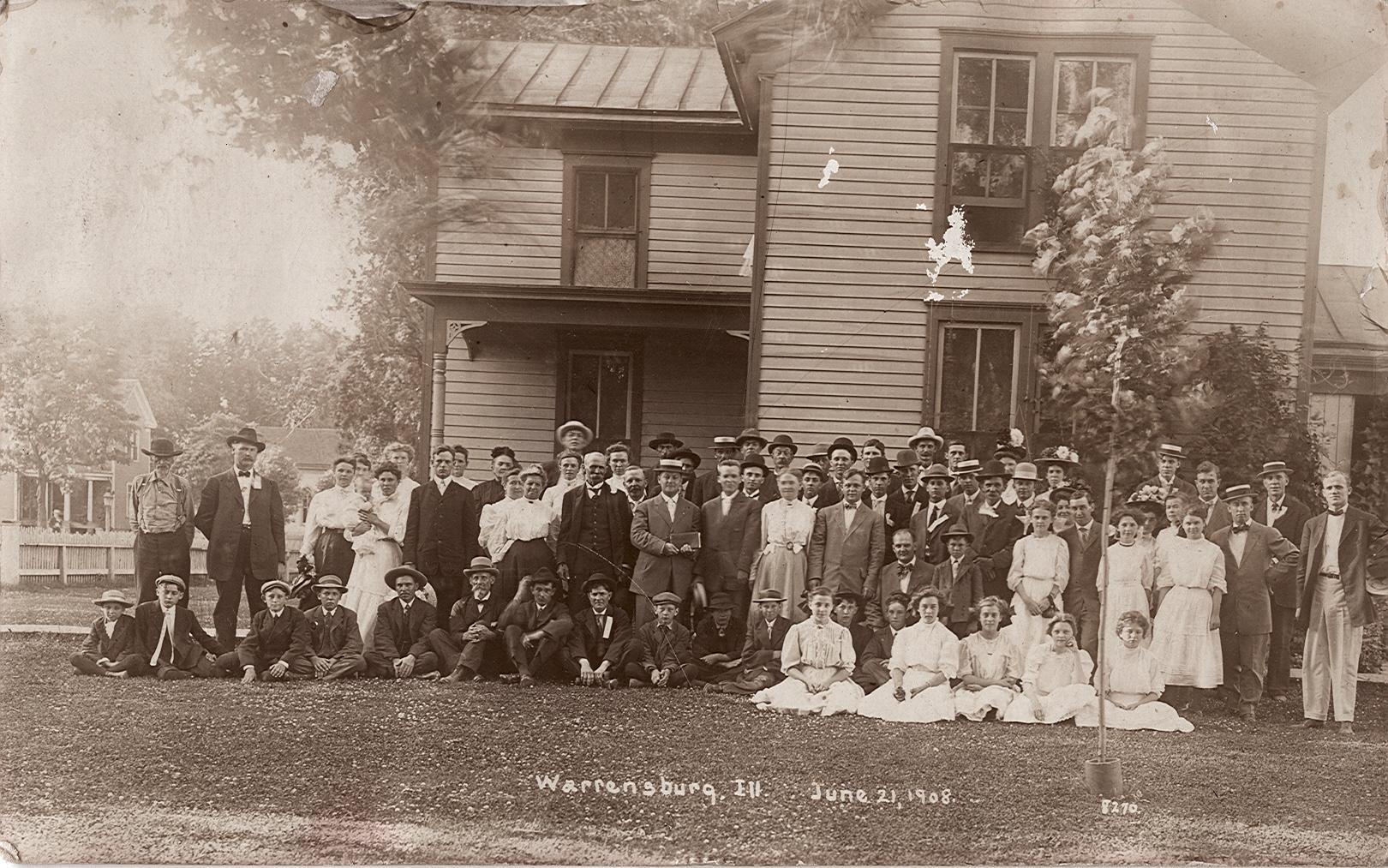 I have no idea what the occasion was or whose house is pictured here. I recognize only one face, that of Lovina Hursh (she's two away to the left of the man in the center who is holding a book). On the back of the photo is: "Genuine Photo by C.U. Williams, Bloomington, Ill. My grandfather wrote his initials on the back - J.E.H. Any information about the identity of the people in the photo and the event that led to the picture being taken would be appreciated.

NOTE FROM CC: As I was preparing this photo for placement on the website, I had the chance to blowup the picture and take a good look at it. A number of the men have a "ribbon" pinned to their coat lapel. 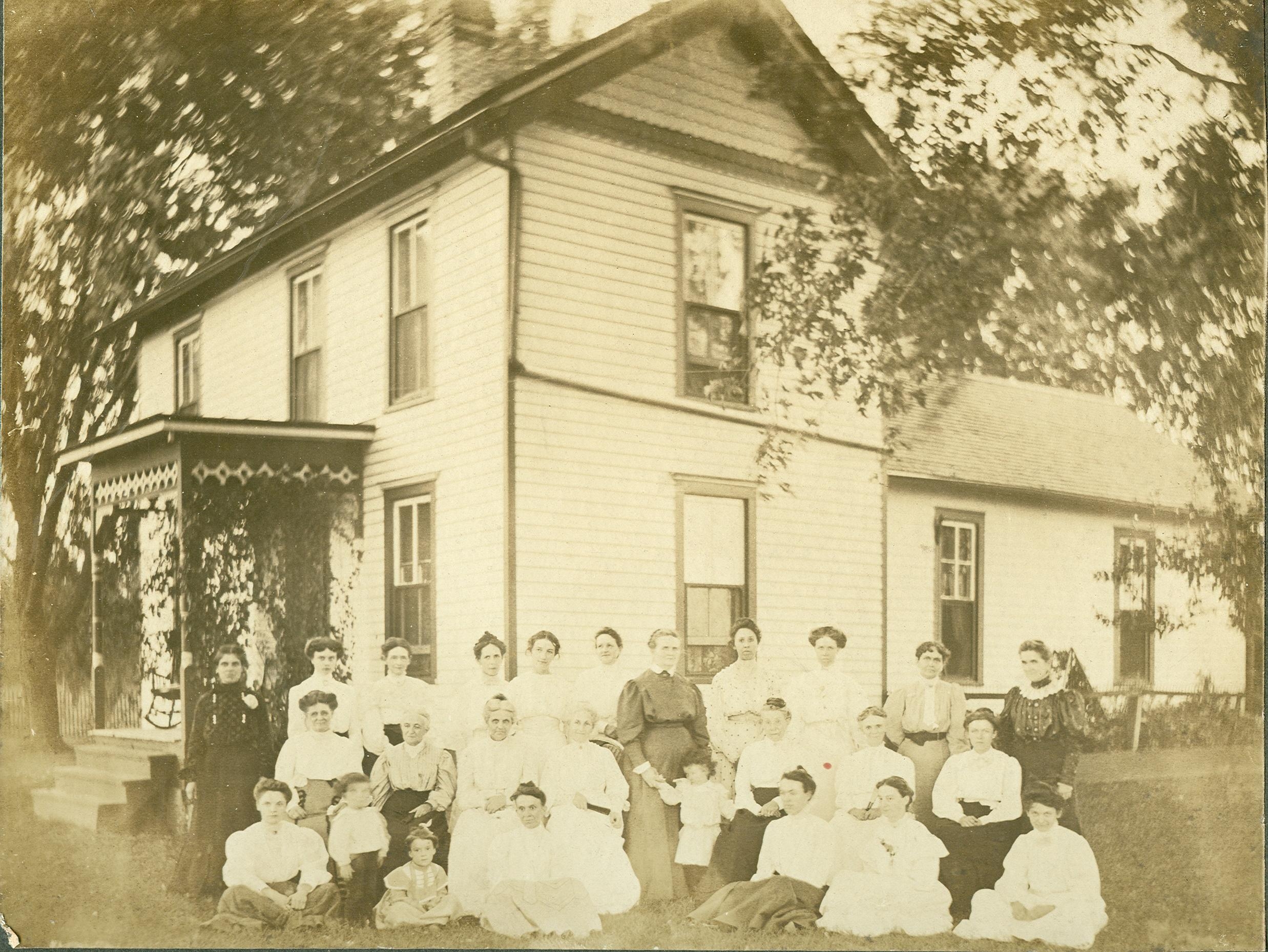 This photo may have been taken by the parsonage that used to be across from the Congregational Church.

Who else is in the picture? If you know, please contact me. 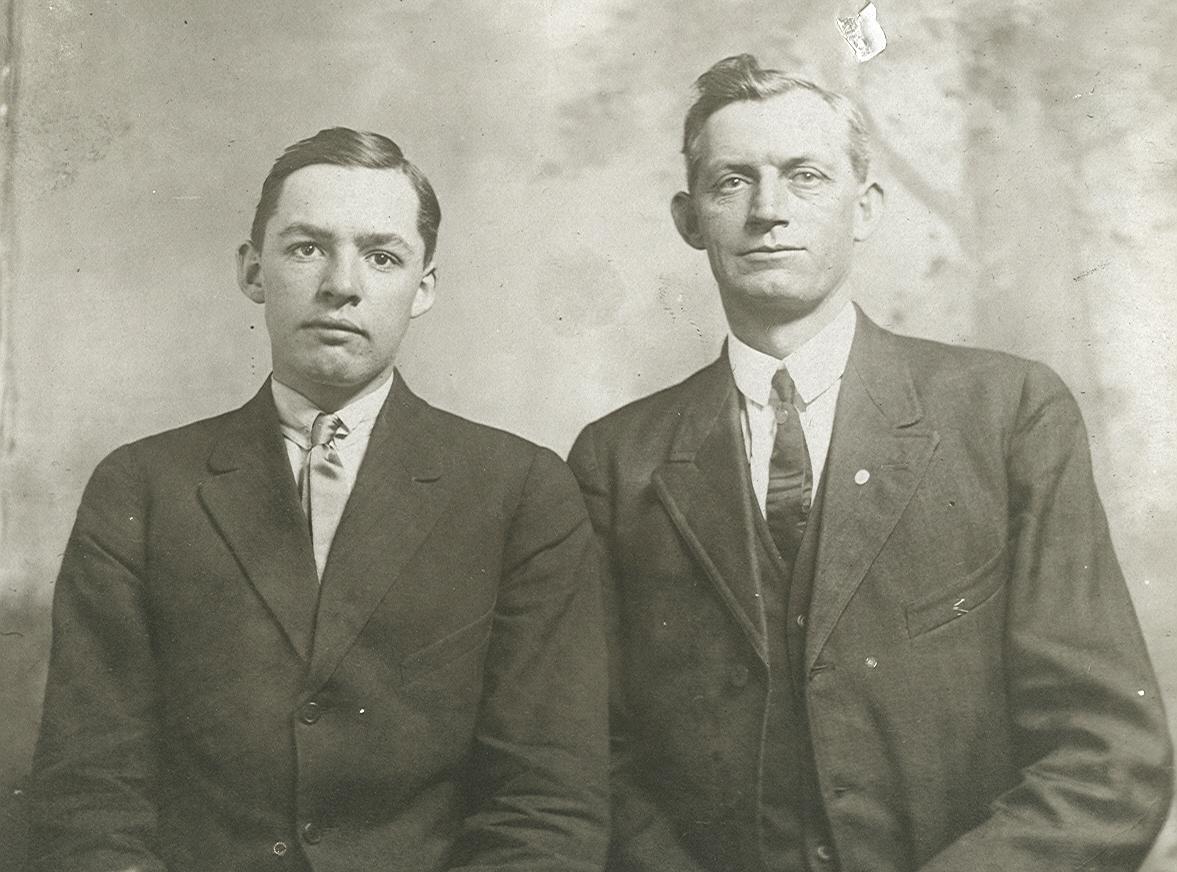 For more information about this family, please click here!