Photo of the William Henry Clay Diss family taken in Decatur about 1916. 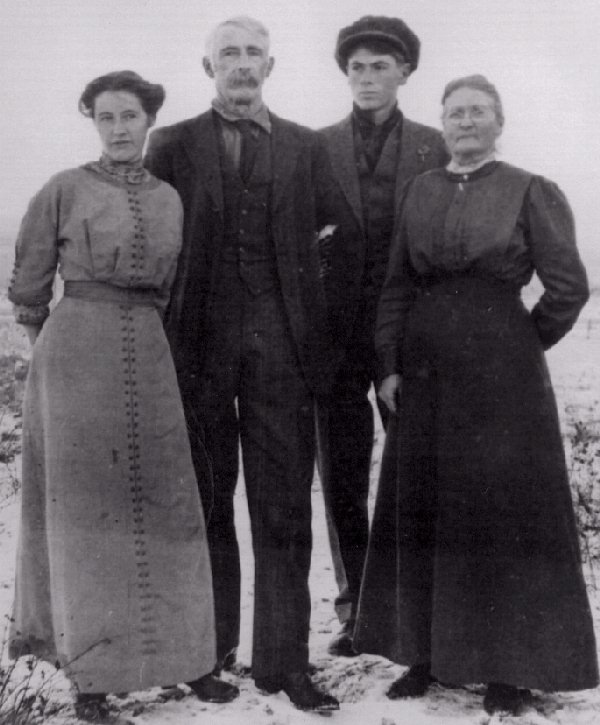 Photo of Anson Barnett family at Strathmore, AB ca 1925 or thereabouts. Left to right: dau. Jesse Ann, Anson, son Jim Thomas, Anson's wife Mary (McClure). Anson and Mary were married in Macon Co. on Dec. 10, 1890. Jesse and Jim were born in Illinois...either Macon or Madison Co. The family moved to Alberta in 1909. Does anyone know who Anson or Mary's ancestors were?

"THREE TWINS" CLUB FORMED
Great Gathering Occurs Entirely by Accident.
Robert Pate and his sister, Olive Pate Butticaz of 2235 North Edward Street, boarded a street car on Memorial Day to attend the memorial services. The two are twins, aged 65, and both have lived in Decatur the better part of their lives. The next stop the car made David Rice and his twin sister, Mrs. Mattie Hayes, were waiting to make the trip down town. The two are nephew and niece of Mr. Pate.

TWO MORE
"As they came in I marshaled them into seats," said Mr. Pate in relating the unusual incident. "We hadn't gone very much farther when Ida Andrews and Ada Lunn boarded the car. They too are twin sisters and nieces of mine. We formed a club, calling ourselves the "Three Twins" and I decided that the best thing we could do would be to go and get a picture. "We trooped up to Wasson's studio and faced the music. 'We're all twins' we said, 'and this is the time to celebrate.'

ANOTHER ONE
And the queerest part of the whole affair is that when the photographer, who aimed his muzzle loader at us, came out from his barricade when I made the remark about the twins, and looked us over again. 'I'm a twin myself, said he, 'and this is Decoration Day and we're all here.' Then he went back into hiding and made a good picture." The photographer, John Lindquist, is one side of a twin sketch and considered his work on this picture a happy coincidence.

GREW UP IN DECATUR
Mr. Pate was born and raised in Decatur, and is proud of the fact that he got by the enlisting officer of Company I when the call came for volunteers in the stirring '60's. He served with he 7th Illinois through the war, re-enlisting when the second call came. He is one of the prominent members of Dunham Post, G.A.R.


The following 3 pictures were submitted by Misty Flannigan. 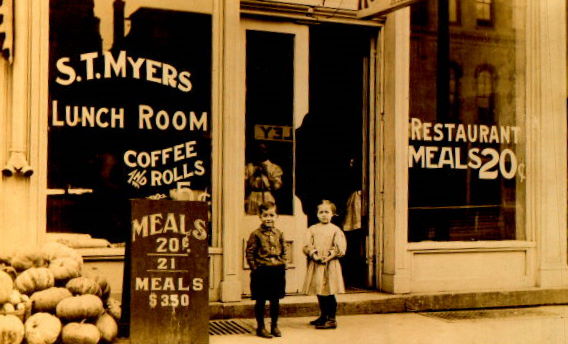 This photo is of The Myers Hotel and resturant. The children are Earl and I believe Dorthy Myers, children af Samuel and Mertle Myers who owned the Hotel. 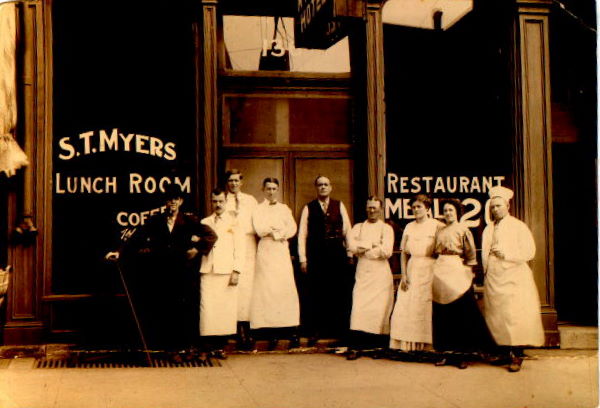 Misty believes that the man in the above photo is Samuel T. Myers. He is in the suit. I would guess that the others are the employees. These photos were taken by Ralph Meek in Decatur, or at least the one of the Hotel and the two children. This may have been taken at a different time. 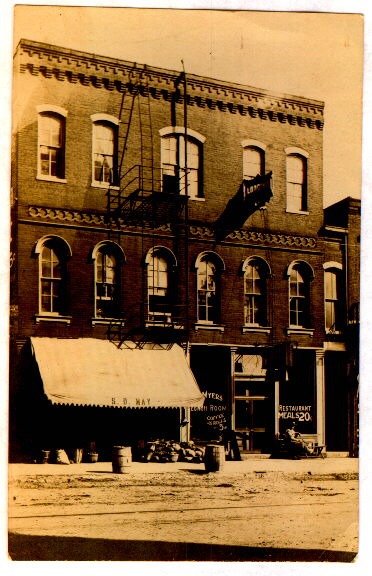 See: Article on the Goldrush